Jessi Bradshaw is Senior User Experience Designer at LinkedIn, San Francisco. I had the pleasure to hear her presentation with the title “Designing happiness – how design thinking and big data can help design for happier humans”. Jessi spoke about employee happiness, and how an employer can influence (i.e. prevent or fix) it. But what caught my attention mostly was her statement that “unlikely intersections create innovation”. I strongly believe so too. When talking about “intersections” I am thinking about diversity.

Diversity stimulates (results in) innovation. Hence there is a business incentive to have diversity. In a previous blog post with the title “Diversity, Innovation and the future of the German economy” I wrote about a report by the Boston Consulting Group. According to this report, companies with above-average diversity on their management teams outperformed their peers. Thus there is a business reason to invest in diversity. But in my view the main reason to stimulate diversity is that it’s the ethically right thing to do. Greater diversity brings greater fairness to society, and helps fix historical, social and societal injustices.

Jessi spoke about “unlikely intersections”. One form of “intersections” refers to different types of people, i.e. diversity at the workforce. In my previous blog post on diversity I already wrote about the strong correlation between diversity and innovation. I quoted an HBR article that distinguishes between two types of diversity: inherent and acquired. “Inherent diversity involves traits you are born with, such as gender, ethnicity, and sexual orientation. Acquired diversity involves traits you gain from experience: Working in another country can help you appreciate cultural differences, for example, while selling to female consumers can give you gender smarts”.

How To Change the HR Practice?

After the presentation, Jessi and I engaged in a one-to-one discussion. We both agreed on the need for diversity in the workplace. Jessi raised the question how the HR practice can change to stimulate diversity at the workplace. Here are some thoughts and ideas from our discussion.

Many organizations have diversity / inclusion programs in their HR policies. These policies state that the companies give women, minorities and other groups an equal opportunity. Such programs refer to inherent diversity. While a lot can be said on how these programs are actually implemented in reality, maybe one could posit that inherent diversity is being addressed more often, or better than acquired diversity. Yet it should not be an “either or” approach. We need both.

Don’t Put People In A Box

HR often works with job profiles, containing lists of characteristics that HR professionals expect candidates to have. Such a list functions as selection criteria, or a “box” where one can place each candidate. Especially when the number of applications is high, such list of characteristics may be an operational solution for selecting (or: disqualifying) candidates efficiently. Yet the consequence is that only similar candidates are invited for an interview. If we do not want to “put people in a box”, is it possible for HR to develop job profiles that are less strict about required characteristics? Job profiles that even call for different types of candidates, and thus stimulate diversity?

In my view, this topic can relate to both inherent and acquired diversity.

Which New Elements Does A Candidate Bring To The Company/Team?

When interviewing candidates, the interviewer often considers how the candidate fits in the company. This often entails “how similar is the candidate to other employees”.

In my view, this topic can relate to both inherent and acquired diversity.

Correlation Between International Experience And Diversity

This topic relates to acquired diversity.

The road to true diversity in the workplace is long. Unfortunately, I still regularly witness behavior that does not fit with “diversity”. Certain behaviors are so deeply rooted in people, that they often do not even notice that they say something wrong, something that entails a judgment or narrow-mindedness. Something that may hurt the feeling of others, or something that implies that others are considered inferior before they have had the chance to even present themselves.

But the fact that the road is long does not mean we give it up! On the contrary, it means that we all should be aware of the topic, create awareness among others, and continuously do self-reflection on how well we deal with this topic. By doing so we design happiness. We prepare the ground for unlikely intersections to take place. We innovate. And we design a better workplace, a better society. 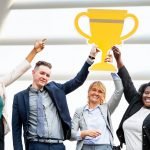 How Diversity & Innovation Shape the Future of the German Economy?

Grief In The Workplace